Over the years, Blockchain has displayed the potential to disrupt many, if not most of our existing industries.

Among other things, the ongoing developments with Blockchain has brought concepts such as digital securities and smart contracts to the limelight. As one of its major promises, Blockchain has the potential to automate processes of issuing, managing, and trading digital representations of real-world assets, while eliminating the intermediaries involved in the process.

In what follows, I will discuss some of the major pros and cons of using smart contracts to digitize securities on the Blockchain. However, before moving on to the core subject, it would be worthwhile to briefly discuss some of the key concepts involved in the process of the aforementioned digitization.

What is a Smart Contract?

Smart Contracts are digital, automated versions of traditional contracts. By definition, a smart contract is a piece of code, containing the terms of an agreement between stakeholders, which automatically executes itself when certain pre-defined conditions are met.

Needless to say, smart contracts are built, and deployed, on top of a Blockchain. Consequently, and ideally, a smart contract is as decentralized as the underlying Blockchain itself. Also, instead of the supervision of central authorities, smart contracts rely upon mathematical proofs, making them “almost” fault-proof.

How do Smart Contracts and Distributed Ledgers Apply to Digital Securities? 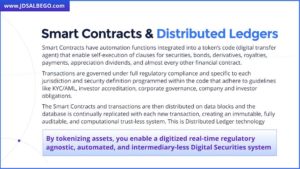 A background on ICOs and Securities Regulation

In 2017/2018, the crypto community, and the world at large, witnessed a boom in what’s known as an Initial Coin Offering or ICO. In short, an ICO is a method by which the issuer raises funds either to start a new business or expand an existing one. However, this was also the year of exchange hacks and scams, causing investors to lose around $9 million each day, on an average.

Traditionally, securities include equity, debt, derivatives, and real estate. Yet, as we will see later, it may be possible to represent any asset, physical or otherwise, as securities taken in the aforementioned sense.

In general, a token is a representation of any asset of value, built on top of a Blockchain. Technically, it’s a smart contract hosted on a specific address on the Blockchain. It contains values hosted on other addresses which, in themselves, include cryptographic information.

By the process of tokenization, it is indeed possible, theoretically at least, to make digital representations of any and every real-world asset, that is, of securities. Thus, tokens, which are themselves smart contracts, can be used to digitize securities.

However, according to standards such as the ERC20, a smart contract is a token if it has at least three functions – the total supply(), balanceOf(address owner) and transfer(address to, unit256 value).

Now, with the understanding of smart contracts, distributed ledgers, tokens, and digital securities gained thus far – theres something highly worth mentioning before we move on. 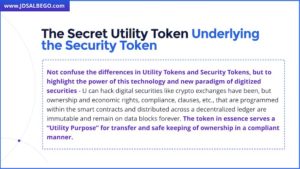 Moving forward, let’s discuss some of the pros and cons of this approach to digitizing securities.

At the outset, the reader must note that the list isn’t exhaustive by any means, we would need another 10 pages at least, to cover all the benefits of digitizing securities with blockchain.

So, before we move into that; here is a simple but thorough breakdown of the full benefits of Tokenizing Securities 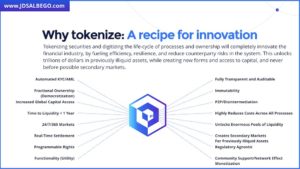 Now, onto some of the most crucial benefits:

Although joint ownership has existed since eternity, so to say, it’s been highly limited to certain asset classes. Yet, with the use of security tokens, it is possible for investors to gain fractional ownership of single high-value assets. The programmability of the smart contract enables issuers to break up a singular asset into infinite fragments, each of which may then be invested into by separate investors.

T+2 is a common vocabulary of the Wall Street, meaning Trading Day + 2 days. In these three days, between the lending and settling of securities, there are a lot of counter-party risks, expenses, inefficiencies, and manipulations. Using smart contracts, the trading of digital securities can be completed without the majority of existing intermediaries (middle men), and within the same day, in almost real-time.

Among other things, this rules out the cash lock-in period of two days, and naked short selling of stocks.

When hashed into a public blockchain such as Ethereum, copies of the transaction details of the digital securities are distributed and available to the entire network. Moreover, the process is highly autonomous, based on mathematical proof and pre-defined conditions, and again – ruling out the need for intermediaries.

This imparts much-enhanced transparency to the overall process, which wasn’t traditionally possible. Also, it significantly brings down the risks of frauds, manipulations, as well as, the costs involved in the traditional processes.

Perhaps, this should have been the first point on the list, but I deliberately choose to put it here. Why? Because, automation may well be regarded as the overarching benefit of anything Blockchain, and especially smart contracts. Many of the applied benefits of Blockchain implementation, in general, and of tokenization, in particular, accrue from automation.

First, and most obviously so, automating the process of trading securities significantly reduces the time as illustrated by the T+2 point above. Yet, that’s only one aspect. It’s by virtue of automation that the aforementioned transparency is also achieved. Moreover, by eliminating a range of overheads, such as financial analysis charges, automation can significantly reduce costs, both for the securities issuer and buyer.

That said, we could go on about how automation, in this regard, is helpful. Yet, the fact remains that, it is such a point that demands, and deserves, full-length pieces dedicated to it. So, let’s refrain from the urge to continue, and look at some of the downsides of using smart contracts.

Despite the many upsides of tokenizing securities, there are certain significant drawbacks, technical and otherwise, which act as a major hindrance to it’s mainstreaming.

A crucial security concern of using smart contracts is the possibility of bugs in the contract itself which, in turn, owing to the “immutability” of the Blockchain technology, cannot be removed. Even when they can, the process is highly cost and resource-intensive. Although in a different context, this vulnerability of smart contracts was highlighted by the infamous DAO hack of 2016.

A plausible solution to this is to use code audits. Herein, again, among other things, the need for using standards for tokens comes to the scene. Using modular structures is another way of reducing such risks. Doing so enables us to isolate a piece of malign code, without it’s affecting the other modules in the entirety of the smart contract.

Although scalability is a major concern of the Blockchain technology in general, it has specific implications in this context which, in turn, give rise to other security concerns.

First, and presently, there exists no Blockchain which is optimized to handle the degree of through-put necessary to facilitate the flawless use of smart contracts for the digitization of securities and, most importantly, for trading in the same.

To tackle these issues, such functionalities are handled by centralized exchanges, and not on peer to peer networks. This, in many ways, brings back the concerns of a centralized ecosystem, which the Blockchain technology intended to eradicate in the first place.

Moreover, most existing blockchains use PoW, which is a resource-intensive consensus mechanism. So, even in this regard, existing Blockchains have limited scalability, as this is directly proportional to a massive increase in resource requirements.

PoS, and a hybrid blockchain framework proposed by Ethereum, which plans to use a sharded base chain, and Plasma chains on top for enhanced scalability can be seen as possible solutions to these issues of scalability. Yet, each of these approaches, and especially the second one, comes with its own security concerns and scalability limits.

This point may be seen as related to scalability issues. Yet, I believe, it’s worthy of a separate mention.

Ethereum, the most commonly used smart-contract creation platform at present, levies a fee, known as Gas Limit, for transactions on its platform. As the cost is dependent upon the lines of codes to be executed, a rise in complexity of the contract also means a rise in the costs involved, both for testing and executing the contract.

This not only limits the complexity of contracts but also hampers their security as they cannot be properly tested. Making things worse, there’s a cap on gas usage, meaning that transactions might be prematurely halted if the executor runs out of gas.

To conclude, it can be said that tokenization of digital securities indeed has the potential to transform the future of the finance sector, among others. Yet, to do so, the Blockchain community must be able to come up with efficient solutions to the existing issues which are highly detrimental to the security, as well as, adaptability. As many have pointed out, there might be the need for developing Blockchains, optimized solely to digitize securities using smart contracts.

To learn more on Digitizing Securities with blockchain, watch my discussion at NYC Security Token Forum alongside, Time Draper, TZero, Templum, Securitize, Malta Stock Exchange, and many other leaders of this industry.

Game of Nodes — Who Will Win the Digital Throne?