Early this December was another exciting time in blockchain and FinTech, as I was invited to educate the market at 2 major back to back conferences on topics that are close to my heart at the first-ever Thailand Blockchain Week. To be honest, it’s pretty exciting and action packed 24-7/365 in Blockchain and FinTech. I basically live on a plane and am rarely home for more than a few days to a week every few months or so. But, as an Asia blockchain expert working across major APAC blockchain and crypto territories Tokyo, Singapore, Hong Kong, South Korea, and China, this was a special moment for Thailand and me.

Blockchain and the Future of Banking 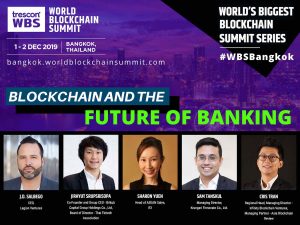 This was the first time that Thailand introduced a blockchain week where investors, experts, analysts, disruptors, and pioneers spoke.

I had the honor to share my views on Blockchain and the Future of Banking at Trescon’s World Blockchain Summit Bangkok 2019 on 12/2/19, sharing stage with a stellar set of other blockchain and FinTech Asia leaders that included – Topp Jirayut Srupsrisopa (Co-founder & CEO at bitkub | Thailand’s Digital Asset Exchange, Board of Director at Thai Fintech Association, Sharon Yuen (Head of ASEAN Sales at R3 Corda), Sam Tanskul (Managing Director of Krungsri Finnovate), and our moderator Cris D. Tran (Regional Head, Managing Director – Infinity Blockchain Ventures, Managing Partner – Asia Blockchain Review). My co-panelists and I provided in-depth discussions on Thailand and other major APAC blockchain territories, new innovations within digital assets and securities, exchanges, banking, institutional finance, and their integration into the global market. You can watch the full 30min video here. 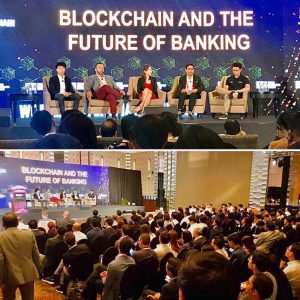 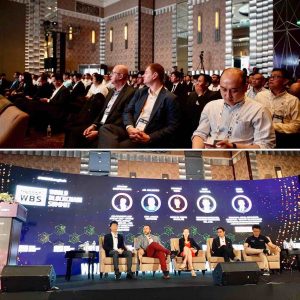 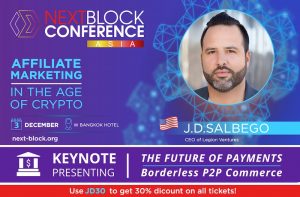 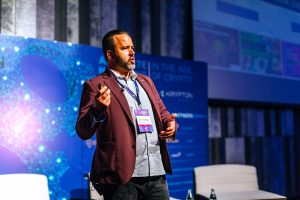 ON 12/3/19 I gave a 20 minute keynote presentation to an enthusiastic audience at the NEXTBLOCK Asia Conference 2.0 on The Future of Payments: Borderless P2P Commerce. We have entered a new paradigm shift where the hierarchy of power controlled by the Googles Facebooks, Central Banks, and countless (supposedly) trusted 3rd parties remove accurate and fair market value, expose us to major security  breaches, bypass laws of scarcity, productized our digital profiles and behaviors in exchange for free services, and so on. The business value-add of the blockchain technology will grow to more than $176 billion by the year 2025, and then it will exceed to $3.1 trillion by 2030 (Gartner 2019). You can watch the full 30 min video here. 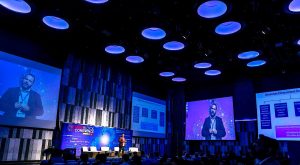 While it won’t be possible for me to cover all of #ThailandBlockchainWeek in one article, I’d like to mention that the week was filled with so many enriching and fun events. And these are just the main conferences; not all the VIP speaker parties, company side events and roadshows, and private investor and business events. 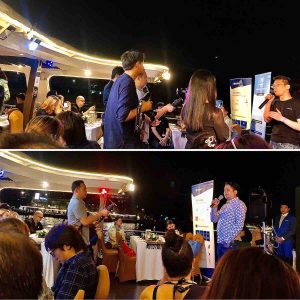 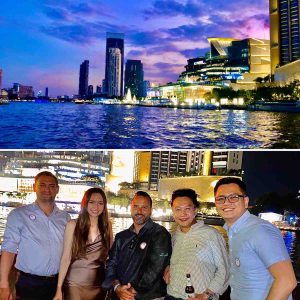 The energy in Bangkok was incredible, and as an expert in the Asian markets, I can sense that the Thailand blockchain scene is about to spread its wings and fly finally. Currently, it is being fueled by the government’s SEC allowing innovation to thrive with within blockchain, STO, FinTech and new remittance and payment platforms, tokenizing assets, digital asset exchanges, etc.

As the world of financing engages and continues to grow with experts coming in with their suggestions and investments, it’s important to look at the current scenario with regards to the topic in Thailand. Earlier this year, the country’s top bank went ahead with its digital currency project by coming forward with a blockchain-based prototype solution.

Interestingly, the central bank, as per reports, has been built in such a way that 24/7 interbank settlements are enabled, thus improving efficiency. 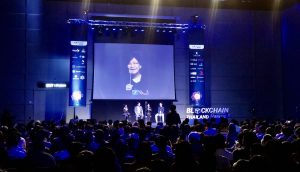 There is another reason that I was more than thrilled to educate the market in Thailand. It is no secret that the country is slowly and steadily becoming the next hub for cryptocurrency. Personally speaking, armed with complete backing by its central bank, I firmly believe there is no reason for the nation to not become one. This comes at a time when other countries, including the United States of America, are still trying to figure out the best possible way of the next generation of financial payment method via cryptocurrencies.

Blockchain and Crypto Conferences in Bangkok

Coming back to the World Blockchain Summit in Bangkok by Trescon, there were over 30 speakers from over a dozen countries who focused on new trends in payments, using innovative technologies when it comes to conversion, marketing and retention among other interesting and important subjects.

As Joel Kovshoff (AKA Coach K), International Marketing Director for BigBang Core an IoT and blockchain focused company said while speaking at the Blockchain Thoughts Leadership Conference, “it’s time for the industry to grow; it’s time for the technology to be utilized correctly and provide beneficial use cases and real world value for businesses and governments worldwide.”

Saying that the value-add of blockchain technology is worth billions of dollars would be an understatement. In my view, we are embarking on a path of major changes when it comes to transferring economic value and ownership. The Next Block Asia Conference, as I noted while giving the keynote speech there on The Future Payments, is definitely one of the epicenters of such a movement.

Blockchain and Cryptocurrency Investing in Thailand

As mentioned in my 2019 Blockchain and Crypto Funding Report, even though funding is down from previous years, investors are still optimistic and betting on blockchain technology innovating the world and paying off big time. To top it all, the world is progressing towards a more digitized version of itself, and has only given more arms for Thailand to expand its reach and attract more investors in this sector.

The best part of investing in Thailand happens to be the country’s vow to ensure that blockchain technology succeeds in being more consumer friendly. The Securities And Exchange Commission (SEC), Thailand has noted that it plans to revamp its cryptocurrency policy in the next year. News reports have quoted a top SEC executive Ruenvadee Suwanmongkol as saying that “laws should not be outdated and should serve market needs, especially for new digital asset products and be competitive with global markets.”  The SEC has also noted that all rules and regulations must ensure that any possible obstacles are met with.

Related: Blockchain Innovation and The Future of Capital Markets 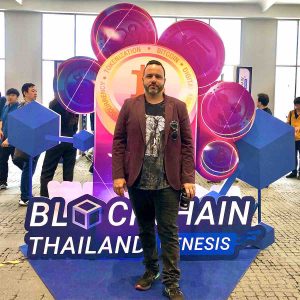 Thailand Blockchain Week 2019 in Bangkok last week was the country cementing its stand on what it aims to achieve in terms of blockchain technology use and its progress. Not just me, but there were several others who noted the importance of the technology in Thailand and otherwise too, including the need for requisite regulations in place.

A very interesting observation came from Kullarat Phongsathaporn, a partner at Baker McKenzie. She noted that “more regulations in the digital asset world were a very important aspect for the growth of the sector since it was going to create an impact to the extent that regulators are active and on their toes.” Kullarat’s argument on the co-existence of regulations and growth is an important one for a country like Thailand, that encourages investment in the technology.

The XT Exchange’s co-founder, Weber Woo, also shared the stage to share his views on the regulations, noting that “crypto in today’s world has to be innovative if it wishes to survive.”

With hundreds of enthusiasts from around the world, it was not hard for me to establish that Thailand is on its way to becoming a blockchain hub along with its neighbors Tokyo, Singapore, Hong Kong, China and South Korea. And as discussed above, the SEC helping its country to become such a hub only adds a cherry to the pie.

There is nothing that the Thailand government does not intend to do with blockchain technology. It has been widely reported that Thailand wants to use the cutting edge technology in tax refunds, prevention of tax frauds, and even using it as a traceability solution for agricultural products starting with rice. The country also wants to use the technology for trading in solar energy—tapping into one form of groundbreaking energy with another form of groundbreaking technology.

Those opposing the technology would say that crimes along cybersecurity lines tend to increase with more and more intrusion with regards to innovation. I also understand why people would have such inhibitions considering in Thailand itself, authorities arrested over 40 people for committing a Bitcoin fraud. 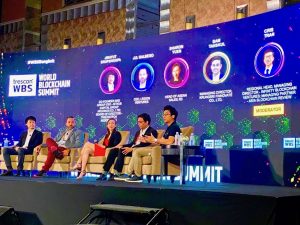 However, it is also imperative to understand that, with more growth comes more risk. And this is where I would quote Woo who, at the summit in Bangkok, said it was imperative for those in power to give more time to the innovators. The end result would only be adding quality to the existing technology.

A rise in demand in cryptocurrency and the technology in itself, I feel, will only empower and pressurize companies to up their game in order to keep competition at an arm’s distance, if not completely ward them off. And that, hands down, will lead to a safer future for next-generation financial transactions and investments. What better self-motivated country than Thailand to lead the change.

Watch both videos of my panel and presentation below

Visit my speaking page to learn more about blockchain innovation and business strategy from videos of me presenting at conferences around the world.