The #1 Cryptoeconomy In The World

When preparation meets opportunity, the stars are supposed to align. At least, this was definitely true for us in Tokyo, Japan during June 2018 when we organized the first Japan Blockchain Conference.

My company Legion Ventures, Global Blockchain Association, Yoshitaka Kitao CEO of SBI Holdings, and in partnership with the Japanese Government; the Ministry of Economy, Trade and Industry (METI) and Ministry of Foreign Affairs (MOFA) organized the largest blockchain conference in the world, nationally televised, with 15,000 attendees across 2 days.

See the conference coverage video below 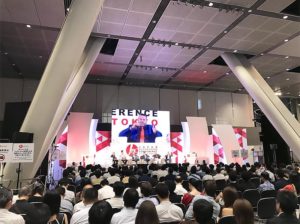 We had global blockchain leaders speaking such as Brock Pierce, Roger Ver, Charles Hoskinson, Yoshitaka Kitao, Miko Matsumara, Josh Constine, lead editor (noted as #1 Tech Global Tech editor) at TechCrunch, and many more. Among other things, I was responsible for contracting the majority of the the key speakers.

Along with co-organizing the conference, I was a speaker as well sharing the stage with David Namdar (Galaxy Digital), Travis Kling (Ikigai Asset Management, and former Point 72 Asset manager), Jason Hsu (Taiwan congressman and organizer of Asia Blockchain Summit), and Avishai Ziv (Singulariteam).

I enthusiastically envisioned a future in which 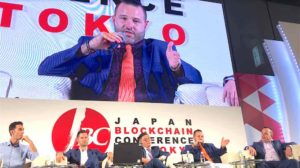 Blockchain implementation is imperative. In doing so, I outlined the benefits of a decentralized ecosystems versus the consolidation of power and control with centralization, benefits from transparency and immutability from distributed ledger technology, and the major challenges of bringing blockchain into mass adoption. You can watch the video of my discussion here.

An Insight on Japan’s Crypto Economy

Such enthusiasm for a Blockchain driven future is not uncommon among the Japanese people. Especially in 2018, a year before which Japan experienced a major boom in its crypto economy. A boom which was somewhat counterintuitive, given that Japan was the first nation to impose Blockchain regulations. In fact, it did surprise many to see that, among other things, the regulations also acted as a catalyst for the boom.

So, there are some obvious questions. What were the regulations, and who imposed them?

Japan’s Financial Services Agency (FSA) implemented the two regulations, which can be summarized as follows.

Bitcoin had already hit the Japanese market back in 2014. At the time of its disastrous hack, valued at $460 million or 8,50,000 bitcoins, Mt Gox, a Japanese crypto exchange, was dealing with 70% of globals transactions in Blockchain. Obviously, this led to a general apathy and mistrust over cryptocurrencies.

However, in 2017, when Japan implemented the aforementioned regulations, while China and South Korea altogether banned cryptocurrencies and ICOs, the international crypto community turned its attention to this Asian nation, which soon became the largest crypto economy in the world.

Apart from anything else, Japan’s recognition of cryptos as ‘virtual currencies’ brought back serious investors into the game. This skyrocketed Bitcoin’s value up to $7000. Moreover, on some of those days, the total virtual currency originating in Japan amounted to 60% of the global volume of bitcoin transactions.

Obviously, Japan’s crypto ecosystem had, and still has, many key players. Yoshitaka Kitao, the CEO of SBI, was probably the most prominent among them. He believes in transcending the limited understanding of Blockchain technology, merely in terms of its financial aspects. That is, we must learn to distinguish Blockchain from Cryptocurrencies.

True to their vision, SBI invests in Asian companies, including those in Japan, using its AI and Blockchain fund of $460 million, declared in the beginning of 2018.

Apart from Kitao, the Wall Street superstar turned Crypto entrepreneur Michael Novogratz who is transforming the regulatory environment not only in Japan, but across the globe.

Broadly speaking, his firm, Galaxy Digital, is on a mission to institutionalize the  blockchain ecosystem in general, and cryptocurrencies in particular. Through these, they aim at promoting the holistic development which, in turn, assists Kitao’s dreams of transcending the financial aspects of Blockchain. As for myself, it was great to work with Novogratz’s Galaxy Digital, and my co-panelist and Galaxy Digital co-founder David Namdar.