December 2019, I was invited to give a keynote presentation at the Next Block Conference in Bangkok, during the Thailand Blockchain Week 2019. There I spoke on the Future of Payments and Borderless P2P Commerce. It was a fun filled week and I also spoke on “Blockchain and The Future of Banking” at the World Blockchain Summit Bangkok the day before.

In this article I elaborate on the topic of my 30-minute presentation to highlight the ways in which blockchain is innovating banking and payments, business processes and systems, eCommerce, and advertising. 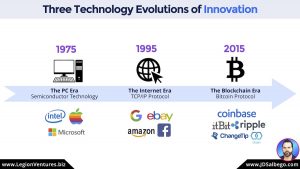 The Three Technology Evolutions of Innovation

The world as we once knew it was certainly changed with the technological advancements of computer chip processing power, memory, and data storage. They once were usable by only the most advanced technical specialists and housed in huge structures that could only fit in buildings. A pre-determined amount of years later came the personal computer. They were now being used by a 10-year-old child, and small enough to sit on their bedroom desk at home. A little while longer came smart phones, smart devices, and now quantum computing. 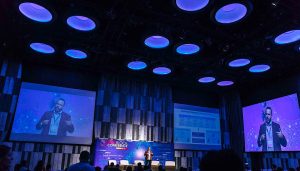 Moore’s law has remained true for processing power and has giving rise to the exponential growth of computational capabilities. Furthermore, it has with little or no direct negative impact on the market or to the customer. The second phase in our evolution has not shared the same promise unfortunately.

The Internet, even with all its glory, started off with a handicap that wasn’t able to be solved efficiently. That problem was with “the transfer of value”. Workarounds were created which gave rise to new digital business ecosystems of trusted third-party intermediaries. They temporarily solved the problem by laying patch upon patch (more and intermediaries) over the leaky hole, instead of replacing the busted pipe in the first place. This strategy unfortunately was at the expense of the customer and end user. 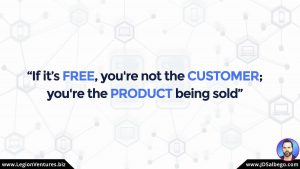 You Are The Product

1). data held the most monetary value.

2). because of that, they could use a freemium business model to scale substantially quicker by luring in customers with little or no traditional level of customer acquisition friction, because the perception of value for customers was so large.

Consumers and governments have finally started to become aware of the lack of transparency with the collection and use of their private data. With this and major events in the recent years,  antitrust violation reviews are looming over the heads of the giants like Facebook and Google.

Now at stage three, we have entered a new paradigm shift where the hierarchy of power controlled by the Googles, Facebooks, Central Banks, Financial Institutions, and countless (supposedly) trusted 3rd parties has remove accurate and fair market value, expose us to major security breaches, bypass laws of scarcity, productize our digital profiles and behaviors in exchange for free services, and so on.

The traditional centralized data, banking, and distribution systems pose a hindrance to the achievement of a truly fair and trustworthy global ecosystem. But now, Blockchain technology is emerging as an effective solution, paving the way for a better future of commerce. 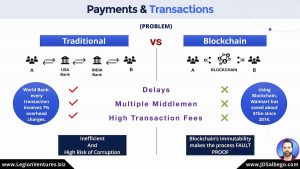 In this digital age, making payments is apparently a ‘simple’ process — click/touch some buttons, enter some details, and voila, you’re done. But in reality, traditional payment systems are much more complicated. For every fund transfer, a lot goes on behind the scenes, especially in cross-border situations. 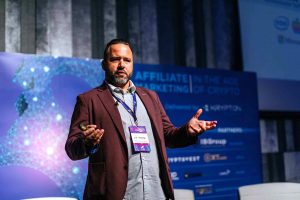 For a better understanding, consider the following situation. Suppose, Company A from the USA wants to transfer funds to Company B in India. For this, in a traditional setting, Company A will approach a U.S. bank which will correspond and facilitate the transfer to an Indian bank. This Indian bank, then, would transfer the fund to Company B.

Given the involvement of intermediaries at various levels, traditional payment systems have greater risks of corruption, are mostly inefficient, involve high processing time and, most importantly, have significantly high overhead charges. According to the World Bank, the Global Average Cost per transaction is 7% of the transacted amount. Obviously, this affects businesses and their consumers alike.

Blockchain, however, has emerged as a nearly perfect solution to the above problems. Being a Distributed Ledger Technology (DLT), it enables seamless fund transfers over peer-to-peer networks, while cryptographically recording and storing transaction data on a shared database accessible to every member of the network. Outcome? Company A can directly send money to Company B, without involving any middlemen.

By eliminating the intermediaries, Blockchain technology not only makes fund transfers more cost-effective but also more efficient, immediate, transparent, and secure. To transfer funds over a Blockchain network, companies or individuals pay a very nominal or no transactional fees, as opposed to paying transfer fees to multiple parties of the traditional systems. For instance, Walmart is reported to have saved about $1 Billion since its adoption of Blockchain-based money transfer platforms in 2014. 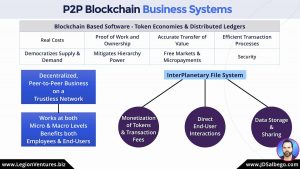 For a better understanding of how Blockchain is shaping the future of payments, eCommerce, and even advertising, it’s imperative that we grasp the basics of the Peer-to-Peer (P2P) Blockchain business model along with its significance. 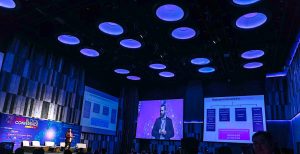 In essence, a Blockchain Business Model simply refers to a business plan or strategy adopted by a business for profit generation, based on a variety of factors including customer demands, demographics, and so on.

However, a blockchain business model is distinct from a traditional one in a number of ways. First, it’s a decentralized model wherein there’s no ‘central authority’ as such. Second, it’s based on trusted networks in which members achieve consensus through pre-determined, cryptographic protocols such as Proof of Work and Proof of Stake, among others. Third, it allows members of these decentralized, trusted networks to conduct peer-to-peer transactions without relying upon any mediating body such as banks or other financial institutions.

Also, over and above these feature-based differences, the traditional and Blockchain business models are different in a more fundamental way. Traditionally, a business earns profits by selling products or services to its consumers at a prescribed rate. In this centralized model — which may, of course, vary from one company to another — wages of employees and other costs of production take into account while determining the price.

A Blockchain business, on the contrary, not only strives for business improvements but also for end-user benefits. By focusing on investors rather than entrepreneurs, a Blockchain business model stresses upon utility and not value. Consequently, it achieves efficient functioning at both macro and micro levels which accounts for the interests of both employees and end-users. Furthermore, it enables end-users to monetize their products by transacting on the Blockchain network.

Filecoin and InterPlanetary File System (IPFS) are two of the most popular use cases of P2P Blockchain Business models. That being said, however, it’s necessary to note that the P2P model is only one form of a Blockchain business model. Some of the other, significant ones include Blockchain as a Service (BaaS), Token Economy (Utility Token business model), Blockchain-based software products, and Blockchain Professional Services. 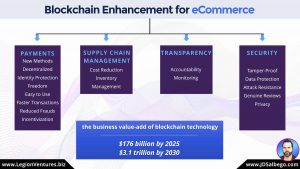 Now, in relation to P2P blockchain business models, and the transforming effects of Blockchain on payments and fund transfers, let’s discuss the ways in which its adoption enhances the eCommerce industry. Because, ultimately, it’s the various industries, their structures, and their functions that Blockchain technology promises to disrupt in a variety of ways. And, eCommerce is one of the biggest beneficiaries of this emerging technology. 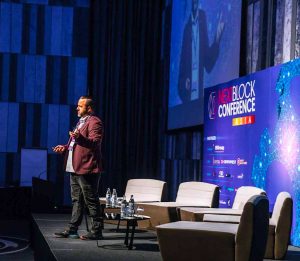 Although the eCommerce industry has grown rapidly over the last decade or so, high costs, inefficiency, and lack of transparency continue to be some of its crucial pain points. As a number of studies have pointed out, on the one hand, most customers shop online because of free deliveries. On the other, nearly 22% of retailers don’t sell online because of high delivery and return costs.

Now, through a combination of the aforementioned ways, a Blockchain business model for the eCommerce industry ensures a significant cost reduction — by eliminating ‘intermediary’ fees and also through automation in supply chain management. Moreover, it gives the industry newer payment methods which, often, come as a desirable solution to the problems of the underbanked.

Yet, cost reduction is not the only way in which Blockchain enhances eCommerce. Decentralized eCommerce platforms are easier to use, offer end-users more freedom and anonymity, can incentivize their contributions, and have faster transaction speeds. It also makes the ecosystem more secure, tamper-proof, more resistant to attacks such as DDoS and 51% attacks, as well as, more transparent and accountable. Furthermore, it ensures genuine reviews of products, services, and platforms, while offering greater privacy to the users. 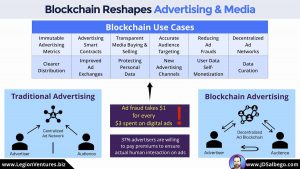 Alongside eCommerce, the Advertising and Media industry also holds immense potential and scope for the implementation of P2P blockchain business models. In this section, I’ll outline 12 possible use cases of Blockchain in advertising. But, before that, let’s briefly look at the present situation. 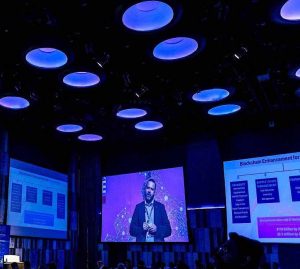 In traditional advertising, the advertiser has to avail of the services of a centralized ad network such as Adsense, Propeller Ads, and Media.net, among others. These organizations, in turn, are responsible for the distribution, placement, and analysis of these ads. Here, the advertiser and the viewer never come in direct contact with each other.

Obviously, this opacity enables several frauds and enhances the risk of manipulation. Ad frauds reportedly cost the advertiser $1 for every $3 of their digital ad spending. Consequently, around 37% of advertisers are even willing to pay premiums to ensure that their ads get actual human interactions and not some foamy bot-generated numbers.

So, how can a decentralized Blockchain-based ad network help? There are at least 12 ways. Let’s break them down:

The Road to the Future

As we’ve seen, Blockchain has immense potential to completely transform our payment systems, eCommerce, and advertising. This, however, is just the tip of the iceberg. The plausible contributions of Blockchain technology towards a truly borderless world extend way beyond what I’ve been able to discuss in this article.

Yes, Blockchain technology at present is still grappling with some major challenges — scalability, most importantly. But, it’s also true that innovations and developments in this regard are progressing faster than light, so to say. And, that being the case, it’s only right to hope that we are steadily moving towards a Blockchain-empowered, seamless, and more egalitarian world.