In the blockchain revolution’s ideology and in the history of global capitalism, the 2008 financial crisis is a critical juncture. It willingly offers a bedrock narrative that justifies the purpose of a decentralized digital currency that offers more trust, transparency, and one central authority that has absolute power. The fragility of the modern financial system was out in the open, one that was heavily dependent on banks and other financial institutions.  In the face of crisis, these institutions had to be bailed out by governments at the expense of their taxpayers.

The crisis highlighted yet another inherent shortcoming of such institutions – their system of betting on high-risk, sub-prime mortgages. The falsely inflated values of homes began to collapse when these mortgages were defaulted on. Banks began experiencing liquidity crises. 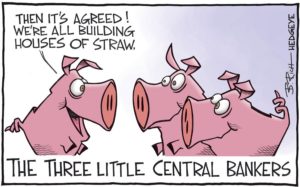 Fiat currencies are the world’s predominant form of currency – they are controlled by a national authority and are backed by nothing but faith in that authority. This has proved to be a huge mistake a number of times throughout the march of history. The incidence of Hyperinflation in Zimbabwe is a classic example.

Bitcoin was quietly introduced to the world in 2009 as not much more than an obscure piece of code, following the publication of a whitepaper by Satoshi Nakamoto in 2008. The invention of the blockchain for bitcoin made it a significant player in the financial system, the beginning of something great, a currency without a government, something significant and necessary.

Why Do We Need Blockchain Innovation?

What happened in 2008 was essentially a crisis of trust. The Lehman Brothers’ story only illustrates how trust is a vital social resource. The root cause of the events of 2008, was not a crisis of short-term liquidity as is often cited, but the integrity of financial institutions’ record-keeping practices and society’s unquestioning faith in their systems. This misplaced trust empowered banks to manipulate ledgers, reselling assets that had no value for years. The incumbent bookkeeping system had also reached its scalability limits.

According to Stephen King’s report in Cointelegraph, “today, the U.S. and most first-world economies are in the precarious position of tightening liquidity as a direct result of overstimulation. It has become commonplace to read about instability in the overnight “repo markets” and leading to the new form of quantitative easing. These are signs that the current financial system is starting to break down again, but unlike 2007, there is an entirely new industry built around the security, liquidity, and stability of our money.”

Implementation of Blockchain, however, offers certain tangible solutions to the fundamental issues which led to these crises. So, what are they?

Thanks to the Blockchain-enabled decentralized frameworks, we can now build automated objective trust into all of our systems on a peer-to-peer basis. Instead of building siloed systems on older database technology, we can now build collaborative infrastructure that everyone can safely rely upon. Blockchains completely eliminate the need for reconciliation as opposed to siloed systems.

Maybe this is because our regulatory architecture and market infrastructure is constructed upon technologies (relational databases giving rise to CSDs and messaging which enabled financial entities to settle transactions quickly) that may have steered previous digital transformations, but are no longer fit or adequate for the purpose.

There is no coherent global financial system for marketers to fall back upon. Although the global GDP has been growing exponentially, so has its concentration in very few hands. According to the World Bank, there are 1.7 billion unbanked people. An estimated $5.8 trillion is currently locked up in illiquidity, held by private equity funds. Only a more transparent, digital-first infrastructure can make some of this value liquid by doing away with intermediaries. Additionally, this network is highly unreliable when it comes to the crossing of jurisdictions and ends up exposing participants to high operational costs and other additional risks.

Instead of requiring companies to build proprietary interfaces, databases and other systems, decentralization implies records can be accessed transparently and securely by individuals, regulators, and issuers of security. No one can undermine the sweeping transformative potential of blockchain technology for global capital markets.

A study conducted by the Frankfurt School Blockchain Center identified 88 companies in the security token ecosystem based in Europe compared to 83 in the US. Of these, 20 were identified in Germany, followed by 15 in Switzerland, and 12 in the U.K.

Related: The Pros and Cons of Using Smart Contracts for Digitizing Securities

Innovating global capital markets with blockchain technology will be the foundation for growing new asset classes and clarifying existing ones. Transparency can be a game-changer in the digital security ecosystem. Who will receive the fruits of your investment in a securities transaction?

Presently, a third-party, “trusted” intermediary acts as that baseline that makes value transfer possible, while ensuring that funds are distributed and adhere to contractual expectations. On the other hand, Blockchain is a panacea that eliminates any need for a third party facilitating secure, quick and reliable transactions. Blockchain implementation instills trust as an inherent element of any ecosystem, involving transactions or otherwise.

Every issuance application, trading operation, smart contractual execution is diligently and transparently recorded on the blockchain to enhance the overall securities ecosystem experience. This ensures the prevention of fraud and theft.

Blockchains, central to every transaction, can maintain and keep a track of the entire logistical chain so that there is a single source of truth when it comes to ownership. It will also simplify processes which will only save a lot of regulatory compliance costs.

Additionally, within a decentralized Blockchain ecosystem, the lack of a central repository of information enhances efficiency, while optimizing performance and resource consumption.

Settlement currently involves high risks and higher costs for transacting parties. Using blockchains, clearing and settlement can be reduced into a single process. It also slashes the time needed otherwise. A cryptocurrency “token” acting as a proxy to the transaction will immediately be transferred to the wallet of the beneficiary. This will constitute the settlement after the ledger update confirmation.

This would also apply across multiple institutions and distinct entities that perform different functions of a single process. This often involves one data set that has to be reconciled across databases. It will help meet regulatory requirements with reporters and auditors having direct access to the immutable data stored on the blockchains.

A crucial impact of the blockchain revolution is liquidity. The incorporation of digitized securities into capital markets ensures the enhancement of the quantity and pace of capital transactions. A range of diverse factors come together and interact in this highly beneficial ecosystem to produce increased liquidity like fractional ownership and asset fungibility.

The former is the digital securities’ property that allows them to be sold as part of the whole. This lowers the barriers to entry, increases transaction turnover and enables smaller investors to participate. In capital markets, increased liquidity translates to the associated liquidity premiums.

When distinct asset classes are traded interchangeably, the possibility of liquidity increases. Access to all kinds of digitized investments will be available to a larger percentage of the world. This will drive an exponential explosion of liquidity events.

Predicting the future in the face of technological strides is certainly a fool’s errand. A decade and a half ago Amazon was only selling books and eBay was king. Looking back, it may seem obvious that Amazon would push out big bookstore chains, as well as other brick and mortar shops that sell a host of products.

It was however, not so obvious at the time. The Internet was neat. Nevertheless, it was not possible to imagine all the ways in which it would touch our day to day lives in the future. Much the same might be said about the future of digital payments today.

But I think it’s safe to conclude that the share of electronic transactions will continue to increase and blockchain technology will be widely adopted to process digital payments, as well as other ownership and investment transactions involving a variety of asset classes.

Processing transactions using the blockchain seems to be less costly than the traditional approach. The transaction processing business tends to be highly concentrated. As such, the benefits of switching will be quite large and the overall cost to overcome network effects will be small. Hence, to the extent that it lowers transaction costs, blockchain innovation will become quite the global phenomenon, and a crucial tool to drive home the success of the capital markets.

Game of Nodes — Who Will Win the Digital Throne?